“I used to be taken by all the themes that Alex and Jenny had put into this story,” says Chiwetel Ejiofor of Showtime’s The Man Who Fell To Earth sequence from Jenny Lumet and Alex Kurtzman. “Themes that basically are related as we speak. I’m imply are proper as much as the minute actually, in how we interact with one another in our human connections, but additionally our reference to our planet..”

Becoming a member of us on the Hero Nation podcast, the Oscar nominee added that for him “to have that via the eyes of a stranger was so fascinating to me.”

Hearken to the podcast right here:

Debuting tonight on the premium cabler, the 10-episode TMWFTE is in some ways a sequel to the cult traditional 1976 movie from Nicolas Roeg that starred David Bowie. 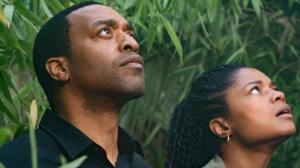 Nonetheless, as I stated in my evaluation the opposite day, this formidable TMWFTE is “all small display screen going huge image” with problems with race, inequity, gender, migration, the environmental disaster, and know-how delivered to the fore. “I used to be excited to have a tiny little bit of distance, to have a look at it via this lens of an alien,” the insightful Ejiofor instructed us on the podcast.

Talking of a sure Marvel character and upcoming film, Ejiofor enlightens us a bit on Doctor Strange in the Multiverse of Madness. No spoilers, however let’s simply say the Elizabeth Olsen and Benedict Wong co-starrer makes some very broad however distinct connections to the larger and evolving MCU.