The stays of an historic Gallo-Roman funerary monument—probably a mausoleum—was uncovered by archaeologists in Chemin des Buis, simply to the south-east of the traditional city of Néris-les-Bains (or, in Latin, Aquae Nerii), in France, the French National Institute of Preventive Archaeological Research (INRAP)announced Monday.

Throughout an preliminary prognosis, the INRAP workforce discovered a fraction of modillion cornice and the nook of a small constructing. The fragment would have been an engaged pilaster adorned with interlocking leaves on high of a Corinthian capital adorned with a figurine. To the pilaster’s left is both a helmeted male bust or a breast plate in bas-relief. Plenty of small ceramics relationship to the first and 2nd centuries CE had been additionally recognized. 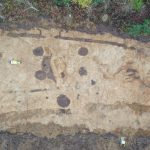 A set of Gallo-Roman buildings delineated by a highway and sections of pipes had been uncovered through the excavation. The buildings would have been fastidiously constructed in tiles certain with lime mortar. The northwest part of this space incorporates a big pit.

There, among the many pit, a sequence of 21 sculpted sandstone blocks had been discovered grouped collectively. The ornamental bas-relief stones are unprecedented finds among the many area of Auvergne. A frieze fragment, measuring half a foot tall by two ft broad, depicts a triton with tentacles ending in palm leaves. He has lengthy hair, a beard, and his arms unfold outwards. To his proper, the entrance half of a horse seems to be galloping in the direction of him. Depictions of sea monsters had been a typical motif amongst mausoleums within the 1st and 2nd centuries CE, because it symbolizes the journey into the afterlife.

A conical formed architectural ingredient with scales, which was damaged in two, seems to be a part of a spire that might have been typical of mausoleums from the interval.

Little is thought about this sector of Néris-les-Bains. This excavation, along with two carried out in neighboring plots in 2010, present that the southeastern plateau was densely occupied through the top of the Roman Empire.

These finds could be in comparison with different identified constructions within the area, reminiscent of Aulnat on the Grande-Borne web site and at Mont-Dore, which have been recognized as mausoleums. Additional research will probably be performed to substantiate whether or not the fragments found would have been a part of a mausoleum.