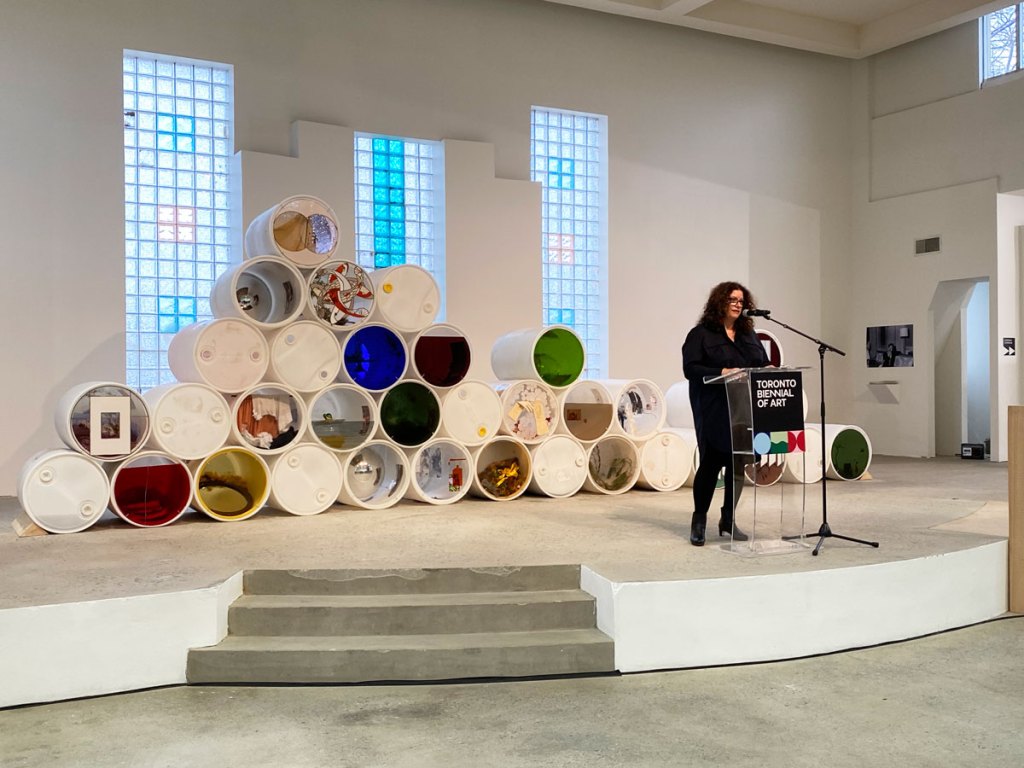 Delayed six months by the pandemic, the long-awaited second version of the Toronto Biennial of Artwork opens to the general public on Saturday, March 26. Because the exhibition’s founder and government director Patrizia Libralato stated throughout a press preview on March 23, “I’ve been saying we’re not a biennial till we’ve performed it twice, so it’s official—we are actually a biennial. In any other case, we’d simply be an -ennial, I suppose.”

That includes greater than 100 works by 37 artists, together with 23 new commissions, this iteration of the biennial takes as its title “What Water Is aware of, the Land Remembers.” The curatorial staff consists of Candice Hopkins, Tairone Bastien, and Katie Lawson, who all additionally labored on the 2019 version. The biennial’s title displays their guiding thought of water and land serving as an archive to the histories which have been purposefully misplaced, hidden, buried, and erased in Toronto, Canada, and past. A number of the tales of Indigenous and Black folks, and of individuals of coloration, could not have survived to at this time, however the water and land can function a witness and supply of data to fill within the blanks.

[The biennial’s curators discuss their vision for the exhibition.]

Unfold out throughout 9 venues all through the town, with numerous packages and performances unfolding all through the biennial’s run, the exhibition, which ends on June 5, provides a sweeping survey of assorted approaches to up to date artwork, with a selected concentrate on set up, movie and video, and textile works. Most of the works on view poignantly mirror on belonging and place, aptly attuned to a public that has largely felt a way of isolation for the reason that onset of the pandemic two years in the past.

“‘What Water Is aware of, the Land Remembers’ attracts from polyphonic histories which can be sedimented in and round Toronto,” Hopkins stated throughout the preview. “These narratives can reveal entanglements and ecologies each throughout time and area. … It’s a chance to ask the query, particularly now ‘What can we consider in?’”